Small Town Girl will be shown at the Plumstead Short Film Festival in South-East London in December.
Download the festival details here.

Not Reconciled is a film poem. Belchite, an old medieval town in Aragon in northern Spain, was fought over by left and right for three weeks at the height of the civil war. When the war ended it was memorialised by Franco to his victory in the war and left in ruins.
Nobody knows what to do with the ruins,least of all the people who live in the village a few meters away, whose children use the ruins as their playground and young people as a place for sexual explorations. For most people in the new village, particularly the ones who remember the war, it is better to forget the past. But the ruins are a constant reminder.
Belchite is said to be haunted, and during our filming strange things happened. First there was an enormous fire. Then I encountered an old lady, Pilar Paris Minguez, wandering around the ruins of her old house talking to tourists. When I tried to find her again she had gone.

Another time I heard ghostly music and sounds of singing.
Not Reconciled is for me, a call to uncover the mass graves and give names to the anonymous victims during and after the civil war. And it celebrates Spanish women’s moment of freedom and liberty in the early part of the last century.
Jill DanielsDirector/Producer 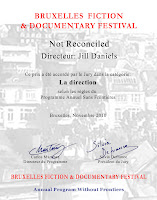 Not Reconciled has been awarded by the Jury of the Bruxelles Fiction & Documentary Festival in the category: La direction. To see the results, please go to www.bruxelles.festivalinfo.org